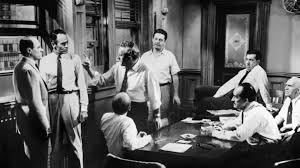 Made by Sidney Lumet in 1957 “12 Angry men” is a courtroom drama based on real jury duty. It is a character and performance led production that relies on the cast to carry it through. It features only one set, the deliberating chamber of a jury. The 12 men are jurors who are all called to make a decision based on the trial they have witnessed. As Gloucester Solicitors will tell you this is the final stage of a criminal trial before the verdict. In this case if the men decide the defendant is guilty he will be sentenced to death for murder. If found not guilty he will go free. All must agree, unanimously, on the verdict of guilty.

The audience are not given any indication as to what the Jurors do, their family backgrounds or even their names.  At first the case seems to be open and shut. The defendant was seen running from the scene by a witness, they had recently purchased a knife but claims to have lost it. This same knife was used and was found at the scene with the prints wiped.

The jurors enter the room jovial. For some, jury service is an inconvenience and one has tickets to a game they want to watch later. However, one juror, number 8, says that he has doubts. He also thinks they should spend some time debating the decision of guilty rather than just vote guilty so they can leave. Challenging the audience conceptions and with great force of will and conviction, plus his own detective work Juror 8 begins to slowly change minds.