The Stained Glass of Gloucester Cathedral 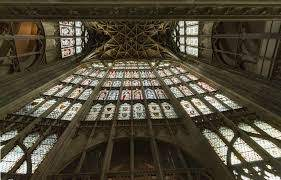 One of the most impressive examples of a stained glass window is located in Gloucester Cathedral. This place of worship dates back to the Dark Ages but it has had many additions and alterations during its long history. In 1350 it was due to receive one of its greatest and most beautiful. This was the installation of the Great East Window. Windows facing East face towards Jerusalem so they are always given a much higher priority and this one is no exception to that rule. At one point it was the largest window in the world. It is 22 metres high and 12 in width. Strangely this is the same dimensions of a Tennis court, not that it was invented back then.

One company that could look after it are these  Gloucester Double Glazing specialists. At least their windows don’t require the degree of care and conservation that this particular window does. It was built in the middle of the fourteenth century as a way of sprucing up the Quire. There was a very good reason for that. King Edward II had been buried there following his unfortunate demise in Berkeley Castle just down the road and the place looked a bit dour.

The whole thing is a graphic representation of the religious  feudal system. It shows a clear chain of importance starting with regular clergy and moving up through the nobility, angels and the saints and apostles. God is on his own at the very top.