The loudest “meh” is from Generation X

If you were born after 1969 but before 1980 you are what is known as a Generation Xer. Before that was the Baby Boomers and before that it was the Silent generation. Some might say (an Xer tune!) there is a little gap for Generation Y but for the most part those born after 1980 are known as the dreaded and much derided “Millennials”. There aren’t many Silents left, born as they were between and during the Second World War but the Boomers, born from 1946 up to 1968 when there was a large population explosion. They are also known as Generation fun. They reap the benefits of the post war boom, they enjoyed full employment and the establishment of a very nice state pension scheme, they pretty much got what they wanted in society. They wanted to dance, they got Rock n Roll and Disco. They didn’t fancy war (when they were young enough to go) so they campaigned to get rid of National Service and resisted the Vietnam War. They wanted 18 years of a Conservative Government and Margaret Thatcher, they wanted Brexit. 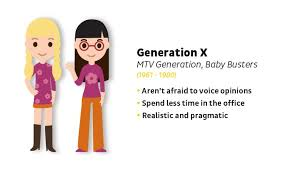 So poor Xer’s have always been in the middle and as a result we are the most easy going unfazed Generation there is. Unlike the rebellious Boomers who were sick of the Dads and Grandads telling them they won the war for them, we had little to complain about. So the Boomers called us apathetic. When we did rebel, Grunge, Rave, the Environment etc we got told to shut up and be thankful for what our Grandads and Great Grandads had done in the War!

One good point though is that we all have the chance to live in Park Homes, like those at http://www.parkhomelife.com/ in our retirement years and after many years of working it will be nice reward.