The Success Story of the British Otters

During the 1970s, one of the most beloved mammal’s native to the UK, the otter, was facing extinction. Otter numbers had become very low, and there were fears that these endearing creatures were about to be lost for good from British waterways.

During the 1960s, the use of harmful pesticides had an enormous impact on many species in the UK, including otters and other top of the food chain predators. The build up of the harmful pesticides in the animals eaten by the otters was causing the problem.

Habitat destruction was also playing a part, as Britain continued to build for the ever-increasing population, the otters’ habitats were being destroyed, and as they are quite secretive and territorial creatures, there was not enough riverbank to go around.

Something had to change, and quickly if the British otters were to be saved from extinction. The chemicals that were causing damage to the wildlife were banned, and a major clean-up operation began by the Environment Agency, to clean up the waterways all over the country.

As a top predator, the otter is a good indicator of the overall health of the habitat in which it lives – the presence of otters indicates a healthy habitat.

From the clean up operation and the banning of the pesticides the numbers of otters started once again to slowly increase. Now, there are many regions of the UK where otter numbers are booming, and indeed have reached capacity. The South West being the most successful otter region. 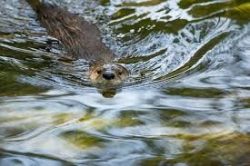 To admire these beautiful creatures, you may have seen an animal sculpture of them at Nature in Art in Gloucestershire, or to see them in the wild a good deal of luck, timing and patience is required- if you take a walk alongside the river at dawn you may just catch a glimpse.